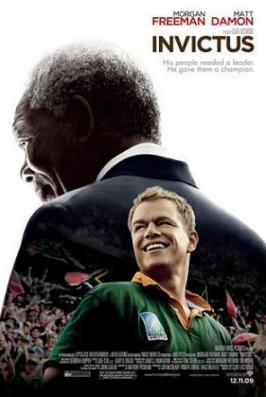 It matters not how strait the gate,
How charged with punishments the scroll,
I am the master of my fate:
I am the captain of my soul.
—William Ernest Henley, Invictus
Advertisement:

February 11, 1990 — Nelson Mandela (Morgan Freeman) finally walks free after twenty-seven years behind bars. Four years later, he became the first black president of post-apartheid South Africa, bringing with him a platform of reconciliation between the white minority, who benefited the most from decades of racial segregation, and the black majority, who in turn suffered the most.

Mending South Africa's fractured identity, however, is easier said than done. Whites and blacks still distrust each other, and its national rugby team, the mostly-white Springboks, still bear the stigma of a bygone era. Not only were they a team of underachievers, but black audiences tend to root for anyone they play against. And after an embarrassing loss to England, the reorganized South African Sports Committee decides to disband the Springboks as relics of the apartheid era. Mandela, however, had other plans.

Still seeing some potential with the Springboks, Mandela personally summons its captain, twenty-seven year old François Pienaar (Matt Damon), and places upon him a herculean task: to win the 1995 Rugby World Cup, to be hosted next year by South Africa.

Even as Pienaar encourages the Springboks to train harder, win more hearts, and make the new South Africa proud, Mandela casts a great gamble by publicly endorsing the team to the black majority as a step forward towards reconciliation. And as the clock ticks toward May 25, when the first fixture takes off at Cape Town, two unlikely allies must stand together if they want to see South Africa transcend race, even for just a moment.

Based on John Carlin's Playing the Enemy: Nelson Mandela and the Game That Made a Nation.