Film / The Invention of Lying 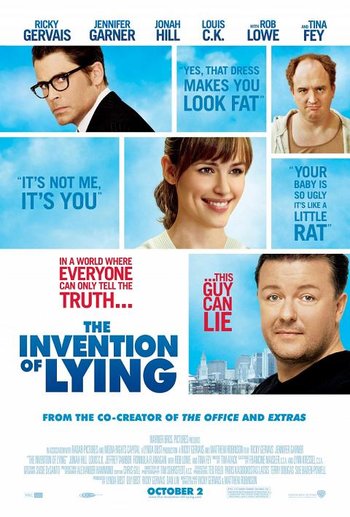 Not the movie poster.
"Today I stumbled upon something that no man has ever stumbled upon before. They'll write about me in history books for generations to come. And yet, moments ago, it was unfathomable not only to myself but to mankind as a whole. It's hard to describe but it was as easy as... how do I explain this, I said something that wasn't!"
Advertisement:

The Invention of Lying is a 2009 comedy film written, produced, and directed by—and starring—Ricky Gervais, who heads an All-Star Cast that includes Jennifer Garner, Rob Lowe, Louis C.K., Jonah Hill, and Tina Fey. It takes place In a World… that has no concept of fiction, philosophy, hypothesis or deceit.

In this world of brutal honesty we find our protagonist, Mark Bellison (Gervais), at the end of a particularly terrible day. When these events finally come to a close, he's lost his job, flat broke and facing certain eviction from his apartment. Then when all seems hopeless, he's struck by the finest "Eureka!" Moment in recorded history. Mark becomes the first person to come up with the idea of intentional deception. Hilarity Ensues. At first.

The film depicts a world identical to our own, minus the ability to deceive or withhold the truth in any shape or form. This results in people being brutally honest and always saying exactly what they're thinking at a given time. The film initially deals with Mark utilizing his new talent for personal gain but then moves toward dealing with the more complex concepts of religion and love.