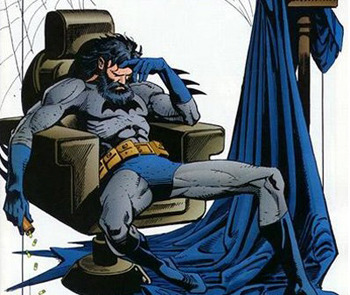 "I'm a lot like my dad, I would have to say
He's been wearing a beard ever since mom passed away
She would have hated it"
— Buck 65, Roses and Blue Jays

One of the easiest ways to show that a male character has fallen into depression is to show him with unkempt stubble or a full beard after a Time Skip. Happens to be Truth in Television: A common symptom of depression is loss of interest in personal appearance, which could mean a clean-shaven man quitting shaving or one with carefully groomed facial hair veering into Mountain Man territory. Often accompanied by the Drowning My Sorrows and Mess of Woe tropes.

Sub-Trope or perhaps Brother Trope to Good Hair, Evil Hair: just as a goatee indicates evil, stubble or an unkempt beard indicates squalor. Sub-Trope of Expository Hairstyle Change. See also Mangst. Contrast Perma-Stubble, which is the mark of a badass, and Wangst, which is telling, while this trope is showing. Also contrast Perma-Shave, where no facial hair grows. If the sorrow drives them to a Face–Heel Turn, it may double as a Beard of Evil. A beard caused by stress rather than distress is a case of Seriously Scruffy.

From Memory Alpha: "The Federation is gone, Riker's beard is everywhere."

From Memory Alpha: "The Federation is gone, Riker's beard is everywhere."