Literature / The Spy Who Came in from the Cold 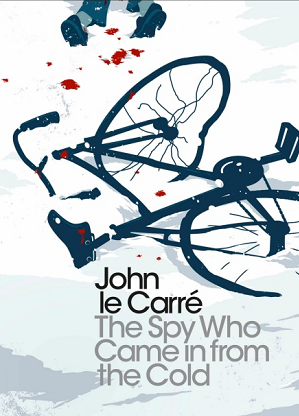 "What the hell do you think spies are!? Moral philosophers measuring everything they do against the word of God or Karl Marx? They're not! They're just a bunch of seedy, squalid bastards like me: little men, drunkards, queers, hen-pecked husbands, civil servants playing cowboys and Indians to brighten their rotten little lives. Do you think they sit like monks in a cell, balancing right against wrong?"
— Alec Leamas
Advertisement:

The Spy Who Came In from the Cold is the third novel by John le Carré, published in 1963.

After the death of a number of British-run agents in East Berlin, SIS officer and head of Berlin station Alec Leamas is recalled to London by the head of the service, Control. When Leamas refuses a demotion, Control then suggests to him a plan to bring about the downfall of Hans-Dieter Mundt, the East German Intelligence officer who killed Leamas's agents. But the mission is not what it seems...

Reflecting the cold and somewhat inhuman nature of intelligence work at the height of the Cold War, the novel suggests that the difference between the Western intelligence agencies and their opponents was very little indeed, with both resorting to underhanded methods to achieve their aims, and that the West was waging the Cold War via means that were incompatible with liberal democracy.

A screen adaptation, directed by Martin Ritt and starring Richard Burton as Leamas, was released in 1965.

Alternative Title(s): The Spy Who Came In From The Cold