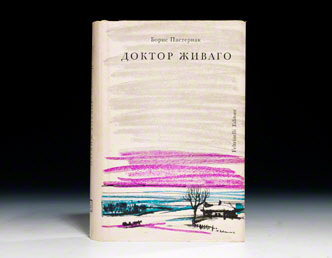 Doctor Zhivago is a 1957 novel that won its author, the Russian poet and novelist Boris Leonidovich Pasternak, a Nobel Prize (which he was forced to reject by the Soviet government). It is one of the most famous works of Russian literature, worth mentioning in the same breath as War and Peace, Crime and Punishment and One Day in the Life of Ivan Denisovich.

A tale of lost love that takes in World War I, the Russian Revolutions, and the Russian Civil War, it has been adapted several times, including in Russia itself.

The most famous film adaptation is Doctor Zhivago (1965), David Lean's followup to Lawrence of Arabia starring Omar Sharif and Julie Christie, best known for its epic scope, and for the world famous "Lara's Theme". The film was praised for its visual style that was a calling card for its director David Lean. It also features Rod Steiger as Komarovsky, Tom Courtenay as Pasha, and Geraldine Chaplin as Tonya.

It was adapted again into a 2002 TV miniseries, which added an extra hour to the movie's run time, making it roughly four hours total. They decided to use the time to add in more characters, move some people around in terms of plot, make it grittier and add in some longer sex scenes which would not have been cool for a 1965 movie. Starring Keira Knightley and Hans Matheson, it also featured Sam Neill as Komarovsky, making him an even bigger Magnificent Bastard than any other onscreen adaptation yet.

In 2006, Russia finally adapted "Zhivago" for its own audience. The miniseries clocks in at 8-1/2 hours long, over 11 episodes, and stays far more faithful to the source material (in both plot and characters) than either the 2002 miniseries or the 1965 film even attempted to do. The 2006 series also, by virtue of being produced in Russia (by Russians), avoids the rampant fake nationality casting which plagues the previous adaptions.

Doctor Zhivago has also been adapted into a stage musical, premiering in Sydney, Australia in 2011.

The Novel itself contains examples of: