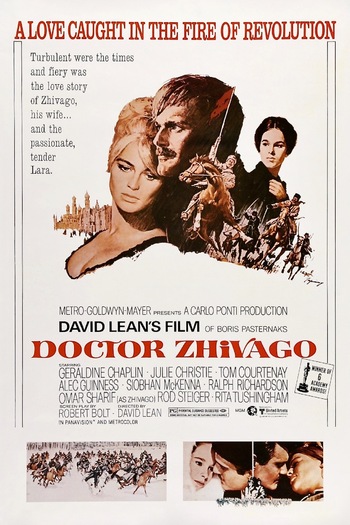 "In a World… of guns and ice
There is the great noise of battle
And the greater silence of Lovers"
—Tagline
Advertisement:

While there have been several screen adaptations of Boris Pasternak's eponymous 1957 novel, this one—scripted by Robert Bolt, directed by David Lean, and released in 1965—is probably the most famous.

It's a generation-spanning epic about The Russian Revolution, starring Omar Sharif as Yuri Zhivago, a doctor meeting the challenges of a World Gone Mad, with Julie Christie as The Ingenue Lara, the object of his affections, and Rod Steiger as the manipulative Komarovsky. Other cast members include Geraldine Chaplin, Alec Guinness, Tom Courtenay, Siobhán McKenna, Rita Tushingham, Klaus Kinski, and Ralph Richardson. Ingrid Pitt, who would go on to become a legendary star of Hammer Horror movies, makes her film debut in a bit part.

Doctor Zhivago was also heralded as the last of MGM's great Epic Movies, as they announced even during production; the studio simply no longer had the money to finance these vast vista works with thousands of extras and a cast full of stars, and the next movie they made was for one-twentieth of this one's cost. Still, the expense seems to have been worth it; when adjusted for inflation, Zhivago is currently the ninth-highest-grossing film of all time; according to BoxOfficeMojo.com, its $111 million domestic take in 1965note as well as subsequent rereleases comes out to nearly a billion dollars in the 2020s.