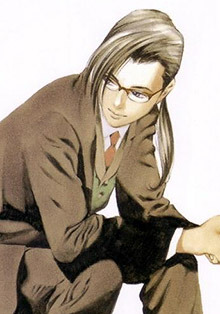 Dr. Kisaragi is a textbook case of this phenomenon.
Advertisement:

Bespectacled girls are cute. Bespectacled short guys are book-smart. Bespectacled pretty boys, on the other hand, are cool, calm and collected. It's not uncommon for them to also be intelligent and kick ass in a fight, as this character type tends to be where the opposing viewpoints of "glasses are for nerds" and "glasses look cool" converge.

Most commonly, the glasses in question are of the narrow, thin-rimmed sort to avoid obscuring the bishie boy's pretty face, though they can be prone to shining spookily. Also, God help you if The Glasses Come Off. If you're dangerous even without removing them, they are Specs of Awesome. If you're a cold, sadistic but hot Love Interest type as well as a spectacled guy, then you might be a Kichiku Megane. If you've got the cold and sadistic but not the love interest, you might have Four Eyes, Zero Soul.

Bonus points if the character also has long hair; double if it's worn in a ponytail. See also the "little round glasses" option of Mask Power.