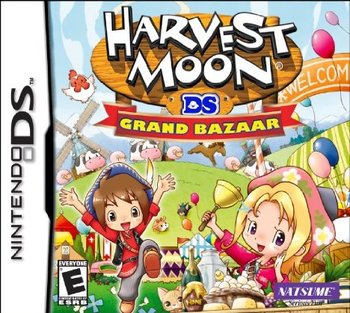 Harvest Moon: Grand Bazaar is a Harvest Moon (now known as the Story of Seasons) title for the Nintendo DS. It was released in December 2008 in Japan, August 2010 in America, and summer 2011 in Europe.

Grand Bazaar takes place in Zephyr Town. Zephyr Town once had a world famous bazaar, however that has gone by the wayside and now few people visit the bazaar. The protagonist has recently moved to Zephyr Town in order to take over a rundown farm. Along the way, they decide to help revitalize the once bustling bazaar.

The game introduces many new features such as windmills, the ability to jump, bug collecting, and several new crops. On the other hand, Grand Bazaar has no mine and no shipping bin. Grand Bazaar once had a wifi system where you could visit other players farms, however that feature doesn't work anymore now that the DS' servers are down.