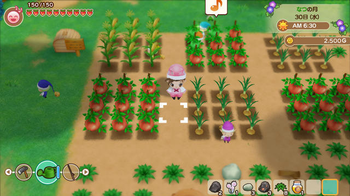 "A harvest of a lifetime!"
— Tagline for Harvest Moon: A Wonderful Life: Special Edition
Advertisement:

The Farm Life Sim genre is a sub-genre of Life Simulation Games and Roleplaying Games focusing on life as a small-town farmer. They're not realistic farm sims like Farming Simulator, but instead use a lot of Artistic License while focusing on the general life of the main character.

The games take place in a beautiful arcadia. They're usually set in either a Retro Universe or a Period Piece (which means the protagonist will do a lot of hands-on farming with minimal machinery).

The player is usually a City Mouse who decides to leave the ho-hum of urban life for a relaxing life as a farmer. Near their farm is a small town full of quirky individuals, including several potential Love Interests that can be married if the player wishes. A good set of supporting characters is vital to this genre; the games can't work on farming alone, there needs to be a cast of interesting NPCs to befriend and interact with. There's also usually a Magic Realism element to the town.

This genre dates back to 1996's Harvest Moon. Released late in the Super Nintendo Entertainment System's lifespan, Harvest Moon was a niche but quirky game about the life of a young man who moves out to live in Flowerbud Village. The game was successful enough to get handheld sequels and eventually a true sequel in Harvest Moon 64, which takes place two generations in the future and expands upon everything in the original. The popularity of the games led to the successful Story of Seasons series (originally localized as Harvest Moon until a change in English translators in the 2010s).

Despite its success, Story of Seasons had little in terms of rivals. The closest were games like Animal Crossing from 2001 onwards, or Farmville and Farming Simulator after 2009, which weren't quite in the same genre. 2016's Stardew Valley propelled the genre into the mainstream gaming landscape. It was essentially Story of Seasons with some added changes which appealed to both veteran Story of Seasons fans and newcomers. Originally released on PC, it became a Sleeper Hit which led to various ports. Many other developers took note of the game's popularity and were inspired to make similar titles.