And Your Reward Is Parenthood 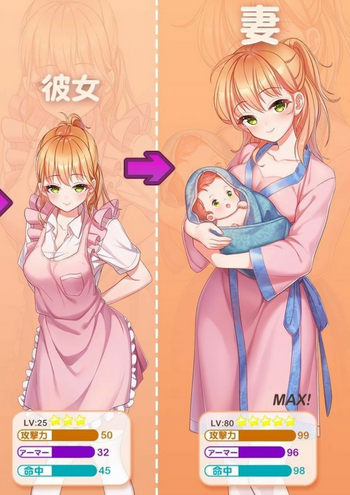 People have children. This is an obvious fact of Real Life—you wouldn't be here reading this if it wasn't, after all. And every once in a while, this aspect of reality will leak into video games, especially in the Life Simulation Game and Raising Sim genres.

Sometimes, as part of your reward for completing certain tasks in the game, your player character is given their very own bundle of joy to raise — they become a parent. Very often, having children is the ultimate end reward for completing a Romance Sidequest — the player and their chosen Love Interest get Babies Ever After. However, this isn't always the case. Sometimes, the player is given the opportunity to adopt a Heartwarming Orphan (whether or not they have a love interest), or magic is used to give the player character a Wonder Child. These two options can be useful for giving the player character a child who's already old enough to walk and talk, skipping the "baby stage" entirely, and is useful for making the child more of a character. What matters most is that having a child is something that happens to the player over the course of the game — they don't start out as a parent.

What having children actually does for the player varies from game to game, though they tend to do one or more of the following things: