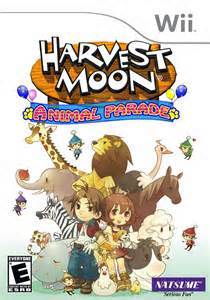 Harvest Moon: Animal Parade was released in 2008 as the second Harvest Moon (now known as the Story of Seasons) title on the Wii. It is a retool of sorts to Harvest Moon: Tree of Tranquility; it adds a number of features, some of which include but are not limited to: taking pictures and storing them in an in-game album, ride-able farm animals (so long as you meet certain requirements), four protagonists to choose from (which doesn't affect overall gameplay as they simply look different), new marriage candidates, family help on the farm, among much more. The game still features the usual farming, taking care of animals, and the cast from ToT.

You start as the protagonist you chose, riding into town on the back of Cain's cart on the way to your new farm. You're accompanied by a Harvest Sprite named Finn, and only you and a few others can see him. Cain will ask you some questions on the way to the farm. Eventually, after you meet the mayor and everyone else in the town, you'll get to see the Harvest Goddess. She's been weakened and her Harvest Tree is dying. You must ring the five bells controlled by the Harvest Sprites to summon the Harvest King, who should be able to revitalize the tree and save the Harvest Goddess. Along the way, you can court some of the marriage candidates, go out on little dates, help Thomas the ringmaster find his lost circus animals, and more!