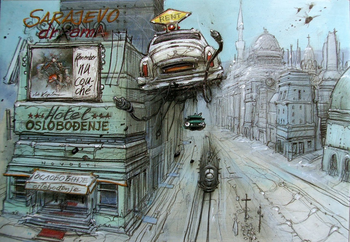 An Alternate Universe where retro, vintage or antiquated technology, styles and aesthetics are still used, but which otherwise is or at least resembles The Present Day. Often cultural styles from different time periods are mixed and matched, usually with those that date no later than The '60s or so.

Note that this is different from an Anachronism Stew and Ambiguous Time Period in that it is not intended as a representation of any actual historical period, but rather as a complete Alternate Universe, which may or may not have any ties to the "real world". This trope may be deployed to achieve a "classic" feel while avoiding romanticizing the past or having to deal with historical problems that would be unpalatable to modern audiences. Or, conversely, it can be used to justify what would otherwise be Politically Correct History.

Retro Universes are popular settings for Steampunk and Urban Fantasy. They may contain Zeppelins from Another World, an Alternative Calendar, Schizo Tech, or a combination of the three. Can be confused with Purely Aesthetic Era, watch your step.

When it's implied or even shown that the rest of the world is Like Reality, Unless Noted outside of a zone of weirdness, this trope can be a sign that you're in Lovecraft Country, the Gothic South, Cloudcuckooland, a Quirky Town, or an Uncanny Village. Just pray it's not Stepford Suburbia.

When it's unintentional, you may get Zeerust or Two Decades Behind. Such is especially common in Long Runners and/or settings that operate on Comic-Book Time.