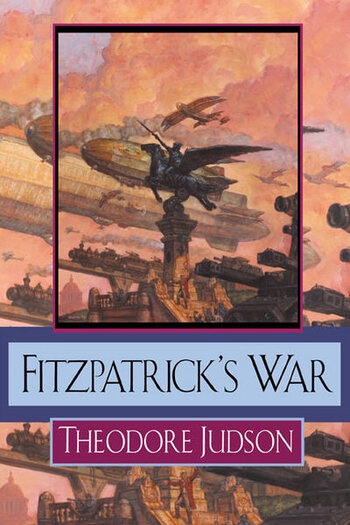 Fitzpatrick's War is a 2004 post-apocalyptic Steampunk Science Fiction book by Theodore Judson (author of The Martian General's Daughter), as well as the author's first novel. Set in the 25th Century, the story is framed through the annotated autobiography of Brigadier General Sir Robert Mayfair Bruce of the Yukon Confederacy, which also chronicles the life of Lord Isaac Prophet Fitzpatrick, a consul of the Confederacy whose life closely parallels that of Alexander the Great and is glorified as a hero after his death. But as deadly intrigue lurks behind the scenes and more of the world's backstory is revealed, all is not what it seems. Something that extends into the very notion of history itself.
Advertisement:

This novel features examples of: