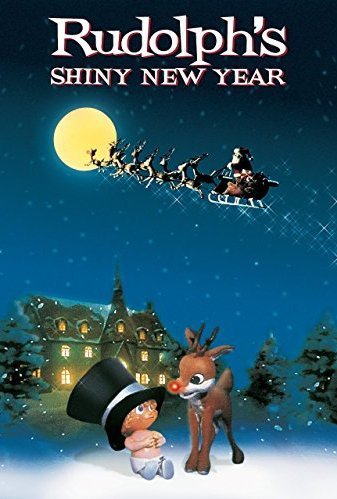 You know Rudolph who guided and pulled Santa's sleigh
And who saved Christmas by lighting the way
But there's more to tell
Rudolph saved the New Year as well!
Advertisement:

Rudolph's Shiny New Year is a 1976 Stop Motion special created by Rankin/Bass Productions. A direct sequel to their own Rudolph the Red-Nosed Reindeer, the special is narrated by Red Skelton as Father Time.

Father Time has a problem. Happy, the Baby New Year, has run off (or crawled off, as it were) because everyone was laughing at his big ears. If he's not found in time, the Old Year will never end and it will remain December 31st forever. Rudolph is sent to search for him in the Archipelago of Last Years, where the Old Years go to retire. Every retired Old Year lives on an island where it forever remains the year during which the Old Year was the New Year.

Hitching a ride with a whale named Big Ben, Rudolph explores the archipelago, visiting three islands onscreen. He's joined on his quest by their personifications, "O.M" (short for "One Million BC"), Sir 1023 (pronounced "ten-to-three" for the time pun), and "Sev" (short for 1776). There is, of course, also a villain. It's a great evil bird called Aeon the Terrible, so named because he's fated to live for exactly one eon. His eon will end with the New Year, so he hopes to capture Happy in order to freeze time and live forever.

Keep the MST3K Mantra firmly in mind, because not a whole lot about this special makes logical sense. Note the number of times this page tells you to "just go with it."

Followed by the 1979 feature film Rudolph and Frosty's Christmas in July, forming a trilogy of sorts. The Rankin-Bass version of Rudolph also returned in the 2001 CG film Rudolph the Red-Nosed Reindeer and the Island of Misfit Toys.

Father Time explains how every year begins with the crowning of a Baby New Year.

Father Time explains how every year begins with the crowning of a Baby New Year.