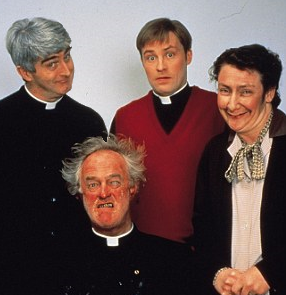 This picture is just resting on this page before Ted moves it on.
Advertisement:

An unhinged Anglo-Irish sitcom (or perhaps more accurately, an Irish sitcom paid for with British money) by Graham Linehan and Arthur Mathews, about a tiny parish on a miserable little island off the coast of Ireland where the Catholic Church has sent three of its most embarrassing members: the embezzler Father Ted Crilly, the idiotic manchild Father Dougal McGuire, and the drunken, violent, foul-mouthed skirt-chaser Father Jack Hackett. Their housekeeper is Mrs. Doyle, who is really dedicated to serving tea. The majority of episodes were Fawlty Towers Plots that involved Ted's efforts to either escape from the island or make a nice pile of cash, neither of which he ever succeeded in doing.

A cult hit in Britain and Ireland, the writers never planned to continue it beyond its third season. Star Dermot Morgan (who played Ted) died one day after finishing filming of the final episode, resulting in the common misconception that the show was cancelled because of this.

Flame wars can break out over whether the show should be considered Irish (its writers, cast, settings, exterior locations and humour were all Irish) or British (it was produced by a British company for Channel 4). Though it was long said that Irish national broadcaster RTÉ had turned it down for fear of offending the Church, Linehan and Mathews have always maintained they never even considered offering it to RTE because they wanted it to succeed - it's not for nothing that the British Channel 4 has been affectionately/sarcastically dubbed "the home of Irish comedy".

Came eleventh in Britain's Best Sitcom, and is beloved in Ireland, regularly repeated on Irish television, and lines from the show are quoted about as often as Brits quote Monty Python.