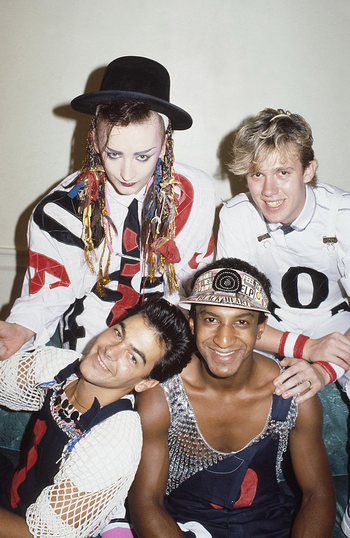 Culture Club are a British New Wave band with an eclectic sound influenced by Soul, Reggae and Glam Rock.

As part of the same New Romantic fashion movement that propelled bands like Duran Duran and Spandau Ballet to fame in The '80s, the group had a series of hugely successful hit singles on both sides of the Atlantic before splitting up in the middle of the decade. The band consisted of Mikey Craig on bass, Jon Moss on drums and Roy Hay on guitar and keyboards. The most famous member of the group was the androgynous, flamboyant lead singer Boy George, a charismatic front man with a distinctive soulful voice. The name comes from the multicultural backgrounds of the members, as well as the diverse influences on their musical style.

Their first album Kissing To Be Clever brought them hits in both Britain and America, including "Do You Really Want To Hurt Me?", "Time (Clock Of The Heart)" and "I'll Tumble 4 Ya", and established them as one of the most popular and talked about pop groups of the early 1980s. Their peak came with their sophomore long-player Colour By Numbers, which sold four million copies in America, launched the international number-one hit "Karma Chameleon" and secured the band the Grammy Award for Best New Artist.

While further successes followed, Culture Club weren't able to top what they achieved with Colour By Numbers. At the same time, tensions were running high within the band; in particular, George and Jon (who had been involved in a clandestine romantic relationship) started to grow distant from one another and could become physically violent towards each other. By the time George was arrested for possession of heroin in the mid-1980s, the band was essentially finished. Boy George would go on to become a solo artist, with his best-known work being a cover of the song "The Crying Game" for the motion picture of the same name.

After being portrayed in a 2010 Boy George biopic on The BBC (Worried About the Boy), the band members' various health problems stymied new projects until 2016, when the four reunited for a world tour.

Jon would leave the band in May 2021 following some disputes over compensation.

Do you really want to trope me?