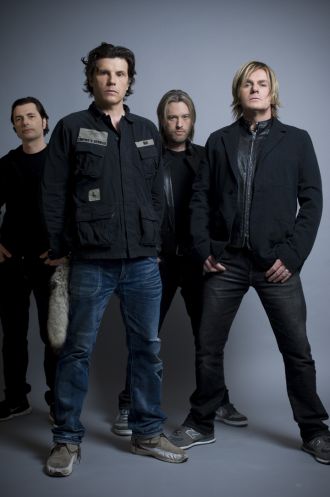 The Cult are an English band from Bradford, formed in 1983. Its origins can be traced back to Southern Death Cult, a short-lived Post-Punk band formed in 1981 by Ian Astbury, and disbanded in 1983 with only two EPs and a full-length combining them under their belt. Astbury then joined with Billy Duffy, who played guitar for fellow band Theatre of Hate, and started a new band from the ashes of the previous one, adding bassist Jamie Stewart and drummer Raymond "Ray Mondo" Taylor Smith. Initially called simply Death Cult (name with which they recorded a 4-track EP), the name was later shortened to just The Cult.

Under this name (and with new drummer Nigel Preston, who wouldn't last until the following year), The Cult set about recording and promoting their debut album, Dreamtime, which was a local indie hit in the UK. Its follow-up, 1985's Love, as well as its lead single "She Sells Sanctuary," marked a shift on their sound from Post-punk to a more conventional Hard Rock with psychedelic influences, and brought them to the mainstream with other hits like "Nirvana," "Rain," "Revolution," and "The Phoenix" on its trail. Their growth to become one of the world's premiere rock bands was consolidated with their third album, Electric, released in 1987, produced by Rick Rubin, and producing the hit single "Love Removal Machine," which remains one of their best-known songs to this day, in no small part thanks to Duffy's driving guitar lines.

1989 saw the release of Sonic Temple, which continued The Cult's hot streak with more hits like "Edie (Ciao Baby)," "Fire Woman," and "Sweet Soul Sister," with a #10 on the Billboard 200 consolidating them as one of the biggest acts of the decade. Oh, and it also launched the career of a young drummer by the name of Matt Sorum.

The '90s, however, were not kind to them, as the rise of Grunge caused The Cult to slip into the wayside like many of their contemporaries. 1991's Ceremony did not garner as much attention as the previous albums note aside from the controversy about the picture of a Native American boy on the cover over image rights, that is, and their 1994 self-titled album was an attempt to modernize their sound that resulted in a Dork Age and the band's breakup in the following year. A reunion in 1999 resulted in an album, Beyond Good and Evil, which was released in 2001 and pretty much flew under the radar within the music industry. Then, in 2002, the band entered another hiatus as Ian Astbury toured with Ray Manzarek and Robby Krieger as a rather controversial new incarnation of The Doors.

In 2005, The Cult reformed for a new tour and released Born Into This in 2007, a full-blown return to the sound that brought them worldwide success two decades prior (said return which had been shaped up in Beyond Good and Evil), which was followed up five years later with Choice of Weapon. While still more fondly remembered by the hits of "Love," "Electric," and "Sonic Temple," The Cult has since been in full swing touring, and will enter the studio to record their next album once the current tour is over.