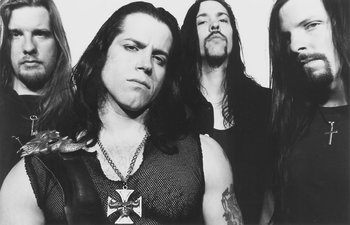 After the first breakup of The Misfits in 1983, Glenn Danzig continued making music in the proto-horrorpunk vein with the band Samhain, which in turn evolved into the band Danzig by 1987. Initially playing blues-based metal, Danzig has gone from doom metal (How the Gods Kill) to industrial ('Blackacidevil) and back again (I Luciferi onward), all the while keeping Glenn's phlegmatic howl and lyrical obsession with the occult at the forefront.
Advertisement:

"Mother, Tell Your Children Not To Trope My Way:"