Three Chords and the Truth 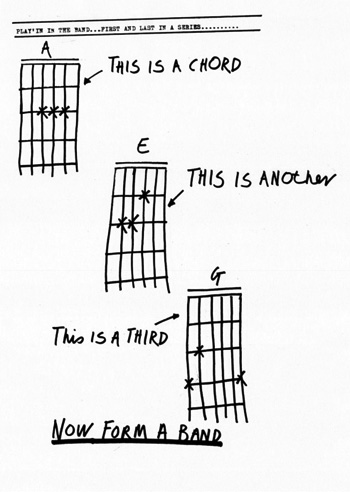 In most forms of entertainment, people like things that are more polished. Most comics fans like skilled art more than stick figures, and TV/film watchers like actors who have training more than random people off the street doing their best.

But among many music fans, this is not necessarily the case. A huge subculture likes their music to be as unpolished and simple as possible. To them, rock music is all about protesting against The Man or getting a solid groove on. Anybody can do that. But to do more complicated stuff, you probably need help from a big music corporation, who will corrupt you and steer you away from true artistic revolution. Forget them; all you need is Three Chords and the Truth.

This is a Cyclic Trope. Pop music goes through periods (generally at two-decade intervals) where it becomes too pretentious, too slick to be taken seriously or formulaic corporate bubblegum. In response, bands turn to Three Chords and the Truth to "get back to where we once belonged." But with time, the limits of the trope mean that everything begins to sound the same and the simpler songs can even become as slick and corporately produced as the complex ones, and music returns to more elaborate songs feeling that more talent=more heart.

At their best, fans of Three Chords and the Truth represent sincere, democratic music that anybody can enjoy, can be played by anybody with a guitar (or otherwise), and rejects pretension or corporate, manufactured emptiness and complexity.

At their worst, they just become a mirror of what they're opposing. They rebel against pretentious, complex, inaccessible music that claims to be True Art — but the ones who hate catchy tunes are just as pretentious, and also want music to be inaccessible to ordinary people. They rebel against people who don't know any music other than what's on the radio — but they don't know any music outside their narrow sub-group. They complain about popular music being narrow and limiting to the point where everything all sounds the same, but if they had their way all available choices would just be narrowed and limited to their own musical preferences — to the point where everything would all sound the same. They rant against any form of music that takes too much practice and talent to play saying that the common man should know how to play any band's song within 5 minutes of picking up a guitar regardless of previous experience; soon they get so down-to-earth that the draw of their music becomes too simplistic to get into. And while they rebel against corporate control of music, smart corporations have learned that they can make a marketing trend out of angry anti-corporate songs. Without a balance between 3-chords and 300-chords, music listeners get blown out on one style or the other and each camp uses the lull to fight back until their method becomes popular again. Note similarities to Full-Circle Revolution.

An interesting note: now that computers (especially Macs) are so prevalent and high-quality recording software can be had for cheap, (or free, for the many people who use Audacity,

) digital recording via USB or MIDI is one of the easiest and cheapest ways to record music outside of a tape recorder.

While the phrase "three chords and the truth" was first coined by Nashville songwriter Harlan Howard (to describe country music), the real Trope Namer is a verse added by U2 to their cover of Bob Dylan's "All Along the Watchtower" on Rattle and Hum, absent in both the original and the famous Jimi Hendrix version.

Contrast with Epic Rocking. See also Epic Riff, which might even be three chords long. A similar trope in pro wrestling is Five Moves of Doom. Add a minor submediant and you get The Four Chords of Pop. Compare/Contrast with Black Metal and related genres, which as noted below takes these same ideas, especially "accessible production values" and uses them in a very different way.

Also note that this article is as much about the philosophy this goes with as the actual Three chord song.

It should be noted that the "three-chord system" developed rather late in the history of western music. The definition of a "chord" in the modern sense came in use about 1560, and a system based on "three chords" containing all the tones of a full major scale was not defined until 1730. Thus, many centuries of European music (and music from everywhere else), for all practical reasons, will fall outside this trope from a strict musicological point of view.

Most hits have a tonic chord (I), fourth (IV), and fifth (V) chords. For example, if the song was in E (the tonic), there would ultimately be an A (fourth), and B (fifth) chords too.