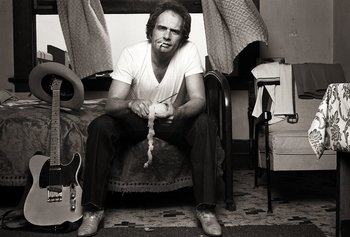 Merle Ronald Haggard (April 6, 1937 - April 6, 2016) was a Country Music artist. One of the only country musicians from California, he helped pioneer what came to be known as the "Bakersfield sound" and was influential in the "outlaw" sound as well.

Haggard was quite the badass early on in his life, including stints in PSI and San Quentin Prison. After working some time with Lefty Frizzell, he actively pursued a music career in the mid-1960s after cleaning up his life. A modest Top 20 hit, "Sing a Sad Song" on the Tally label, brought him to the mainstream for the first time, but it wasn't until he joined Capitol Records' roster in 1965 that the hits started coming. Working with his band, the Strangers, he would chart thirty-eight Number One hits and several more Top Tens throughout his career. Awards aplenty came from the Country Music Association and Grammys, as well as a Grammy lifetime achievement award in 2006 and induction into the country music Hall of Fame. He even got pardoned by then-California governor Ronald Reagan in 1972. Starting in the late 1970s, he switched to MCA Records, and then to Epic Records by 1981 and Curb in the early 1990s. Although he never hit the Top 10 again after 1989, he never gave up on recording.

Haggard passed away on his 79th birthday while recovering from pneumonia.