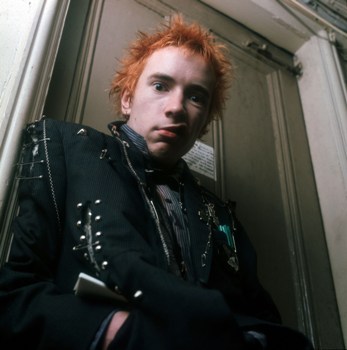 "I am an anti-Christ
I am an anarchist
Don't know what I want
But I know how to get it
I want to destroy the passerby
Cause I want to be anarchy"
— "Anarchy in the U.K."
Advertisement:

John Joseph Lydon (born January 31, 1956 in London, England), better known by his former stage name Johnny Rotten, is a singer and songwriter best known as the lead singer of punk rock band the Sex Pistols from 1975 until 1978, and again for various revivals during the 1990s and 2000s; and the lead singer of the post-punk band Public Image Ltd., which he founded and fronted from 1978 until 1993, and again since 2009. Together with Sid Vicious, he is the most famous punk musician in the world.

Lydon came from a poor working class background in North London. At age seven he was struck with spinal meningitis and spent many months in coma in the hospital. As a result he had lost most of his memory and had to learn to talk again. School became very difficult for him and at age 15 he was expelled. Meningitis also gave him his trademark Thousand-Yard Stare. His bad teeth gave him the nickname "Johnny Rotten", which he would adopt when he became a member of Sex Pistols in 1976.

As legend would tell it he was made lead singer of a new rock group by manager Malcolm McLaren after he saw Lydon walking around in a Pink Floyd T-shirt with the words "I Hate" written above them. (Ironically, Lydon didn't actually hate Pink Floyd; he was just wearing the shirt to be a troll). Lydon couldn't sing at all, but he had the right sarcastic attitude to life and a lot of anger and frustration about the Crapsack World he was brought into. Under his new name "Johnny Rotten" Lydon became Punk Rock's first hero. His Brutal Honesty about the class system, The British Royal Family and the state of Rock and Pop were embraced by countless teenagers and vilified by just about everybody else. By 1977 the Sex Pistols were the most talked about and polarizing rock band of the year, despised and feared by many people. Their album Never Mind the Bollocks, Here's the Sex Pistols (1977) was a bestseller and "God Save The Queen", "Anarchy In The U.K.", "Pretty Vacant" huge hits.

Still, Lydon felt that he and his fellow members were being exploited by McLaren and that Punk Rock was also being commercialized. In January 1978 he ended the Pistols' tour in the USA with his legendary quote: "Ever got the feeling you're being cheated?" and left the band. While McLaren tried to keep the Pistols going for another year, with Addled Addict Sid Vicious as the new lead singer Lydon left his Rotten persona and started a new band: Public Image Ltd..

Public Image Ltd was a collaboration between Jah Wobble and Keith Levene and more true to Lydon's actual interests in Avant-garde Music. They abandoned Punk Rock's musical style, but kept the anarchistic and anti-commercial attitude. For what remained of the 1970s and most of the 1980s Public Image Ltd would be Lydon's most famous endeavour. Still he never left the shadow of the Sex Pistols, being frequently asked for interviews by reporters in search of some audacious quotes. He reformed the Sex Pistols in 1996 for a reunion tour and admitted it was just for the money. Lydon is still frequently seen on TV, either as a presenter, an interviewee or a political and musical commentator. In 1984 he also starred in the Cult Classic "Copkiller" (1984), where he played alongside Harvey Keitel.

In his homeland he remains as polarizing as he ever was, though the British have grown accustomed to his snarky, uncompromising, yet intelligent remarks about a variety of topics. Some hardcore punks see him as a Sell-Out, especially after appearing in so many TV shows and doing a commercial for butter, but he is considered somewhat of a Magnificent Bastard. The best proof of his national treasure status is the fact that in 2002 he was nominated for the title of 100 Greatest Britons and was voted to the 87th place.

In this notorious 1979 clip from the music show Check It Out, John Lydon (formerly Johnny Rotten of Sex Pistols) abandons a particularly patronising interview when trying to promote his new band Public Image Ltd. PiL bassist Jah Wobble soon follows suit, but not before delivering an epic string of (bleeped out) obscenities.

In this notorious 1979 clip from the music show Check It Out, John Lydon (formerly Johnny Rotten of Sex Pistols) abandons a particularly patronising interview when trying to promote his new band Public Image Ltd. PiL bassist Jah Wobble soon follows suit, but not before delivering an epic string of (bleeped out) obscenities.