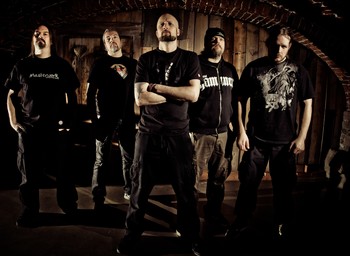 From left to right: Fredrik Thordendaal, Tomas Haake, Jens Kidman, Mårten Hagström, and Dick Lövgren
Meshuggahnote taken from meshuga, the Yiddish and Hebrew word for "crazy" is a Swedish metal band formed in 1987. They are well-known for their signature musical style, which involves lots of chugging, complex, polymetered song structures, loud, savage, bass-heavy riffing, unusual compositions and precise musicianship. Meshuggah has found little mainstream success as yet, but is a significant act in extreme underground music and has received significant critical acclaim.
Advertisement:

Since its formation, Meshuggah has released eight studio albums, five EPs and eight music videos. The band has performed in various international festivals, including Ozzfest and Download, and embarked on the obZen world tour in 2008.

Tropes, it says. Tropes, you will: