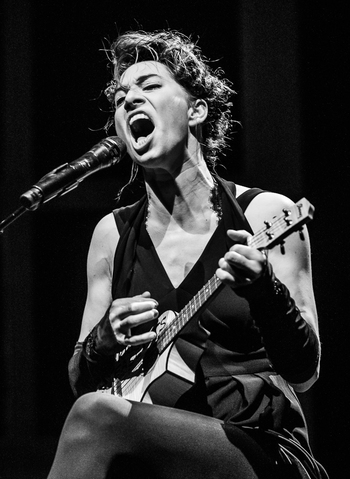 "I'm a Girl Anachronism!"
"I want you to think of me sitting and singing beside you..."
Advertisement:

She's most famous for her work as part of the Brechtian punk cabaret duo The Dresden Dolls, along with drummer Brian Viglione. They released three studio albums and toured as openers for Panic! at the Disco, until they went on hiatus in 2008. Although Viglione and her have done shows together since then, the band has officially broken up, even though Palmer has announced plans of them to produce music again.

In 2012, Palmer famously released an album with her at-the-time band The Grand Theft Orchestra called Theatre is Evil, which was funded entirely over Kickstarter - a groundbreaking artistic decision at the time, which was worth it, as the Kickstarter far overpassed its goal. She released the album for free through her website,

and then debuted on the Billboard top 100 Album list at number 10 due to the immense number of Kickstarter pre-orders. This Kickstarter campaign prompted her TED-Talk in 2013, the ideas of which she then expanded upon in a personal memoir, called The Art of Asking.

Her songs vary wildly in style and topics, with many featuring Dark Humor and subject material. She's fond of recontextualizing children's songs in a more mature, adult way, and of making puns. Amanda's also known for performing covers of whatever she feels like, ranging from an entire EP of Radiohead covers on the ukulele, to classic musicals, to Black Sabbath, to Britney Spears, to a reimagining of Rebecca Black's song "Friday" from the perspective of a truck-stop prostitute.

Along with Jason Webley and Sxip Shirey, she was one third of Evelyn Evelyn, active 2009-2011.

In 2019, seven years after her last studio record, Palmer released There Will Be No Intermission, a far more serious, stripped-down album mostly just featuring her on a piano. It tackles subjects like abortion, death, depression, loss, and the climate crisis, and was released to massive critical acclaim. The world tour accompanying it featured only her at a piano, telling the most intimate and human stories of her life. Concerts often went for up to four hours.

Worked for years as a Living Statue called the Eight Foot Bride. Is also married to Neil Gaiman, with whom she had a son in 2015.

"Let's try to end on a pleasant note."