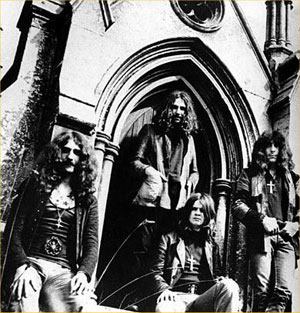 The classic line-up of Black Sabbath. Clockwise from left: Geezer Butler, Bill Ward, Tony Iommi, and Ozzy Osbourne.
"What is this that stands before me?
Figure in black which points at me
Turn around quick and start to run
Find out I'm the chosen one
Oh noooooo!"
—"Black Sabbath"
Advertisement:

Black Sabbath was a band from Birmingham, England who are widely considered to be the first Heavy Metal band (Led Zeppelin, Deep Purple, and Blue Cheer are also cited, but Sabbath is the most common) formed by singer John "Ozzy" Osbourne, guitarist Tony Iommi (who briefly joined Jethro Tull in 1968), bassist Terrence "Geezer" Butler, and drummer Bill Ward.

They started out in 1968 as a blues band called Earth until changing their style to a darker tone. Apocryphally, this was the result of one of the band members seeing a queue for a horror film at a cinema and commenting on how people pay to be scared. Their name did actually come from a 1963 horror movie named Black Sabbath, starring Boris Karloff. Their sound has naturally changed over the decades. Their two most celebrated eras, the "classic" years (1969-1975) and the early Dio years (1980-1982), are marked by massive changes to the sound. For the classic era, they dabbled extensively with Blues Rock, Jazz Rock, Psychedelic Rock, early Doom Metal, and, of course, Heavy Metal. For the Dio era, they took up a more Power Metal and traditional metal stance with some instances of Speed Metal and vestiges of blues metal.

Their first two albums, Black Sabbath and Paranoid (both released in 1970), brought them great popularity with songs like "Black Sabbath," "War Pigs," "Paranoid," and "Iron Man." Due to their darker style, they initially received no radio play, and Vertigo Records had to bribe radio stations to play "Iron Man," which scraped the US charts. Their next albums, Master of Reality and Volume 4, spawned a new batch of classics, such as "Sweet Leaf," "Children of the Grave," "Into the Void," "Supernaut," and "Snowblind." It wasn't until their fifth album, Sabbath Bloody Sabbath, that they finally got positive reviews from the mainstream media (although critics have reversed themselves and retroactively praised the other four albums).

In 1979, Ozzy Osbourne was fired from the band as his increasingly erratic behaviour rendered him generally unreliable. On the advice of the band's manager, Sharon Arden (who would later become Sharon Osbourne), the group recruited Ronnie James Dio, formerly of Heavy Mithril bands Elf and Rainbow, as their new lead singer. Dio's tenure lasted only three years, but he was generally regarded as a brilliant front-man in his own right, and his 1980 debut with the band, Heaven and Hell, is an all-time classic.

From 1982-1984, former Deep Purple singer Ian Gillan joined the Black Sabbath for Born Again and a tour that most notably included the Deep Purple song "Smoke on the Water" as part of the encore, an unusual move for Black Sabbath.

The band saw multiple line-up changes (including a reunion of the Dio-era line-up in 1991) until the original four reunited in 1997. As Ozzy again drifted away from the band in the mid-2000's to focus on his solo career and semi-retirement, the other members reunited with Dio and performed under the name Heaven and Hell until Dio's death in 2010.

In the state of limbo the band was after Dio's death, the original line-up had confirmed its reunion, with a new album and a tour on the way, but Iommi's early stages of lymphoma had to halt all their summer tour dates as Black Sabbath except for Download Festival, with "Ozzy and Friends" performing most of the dates due to Iommi's condition. In May of 2012, drummer Bill Ward broke from the band, citing contractual differences, leaving the band to perform its first show in Birmingham with Ozzy's current drummer Tommy Clufetos. The latest studio album, 13 was recorded with Rage Against the Machine drummer Brad Wilk (who coincidentally shares the same initials as Ward, and whose name would be an anagram of Ward's if not for one letter.)

On 3 September 2015, it was announced that Black Sabbath would embark on their farewell tour, titled The End, from January 2016 to February 2017. Despite earlier reports that they would enter the studio before their farewell tour, Osbourne stated that there will not be another Black Sabbath studio album and that Black Sabbath is indeed over. However, an 8-track EP entitled The End was sold at dates on the tour. Along with some live recordings, the CD includes four unused tracks from the 13 sessions.

On February 4, 2017 the band played their final show ever at Genting Arena in Birmingham, U.K.