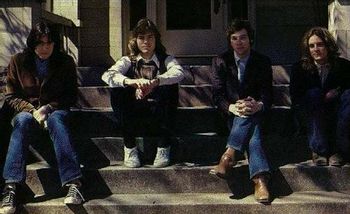 Big Star was a legendary Power Pop band from Memphis, Tennessee, famous for their complete failure to gain massive commercial success but being embraced by the indie scene and remaining a significant influence on Alternative Rock.

The band's classic lineup was as follows:

The band formed in 1971, when Chilton (former lead singer for the '60s blue-eyed soul group The Box Tops, of "The Letter" fame) joined Bell, Hummel and Stephens' band Icewater. Taking the name "Big Star" from a regional grocery store chain, they were quickly snatched up by Ardent Records, a subsidiary of the famous soul/R&B label Stax Records. Stax had hit a bad spell and its future was uncertain, so they thought Ardent and Big Star would become successful and manage to stave off the company's decline.

The band's first album, the humorously-titled #1 Record, was quickly recorded at Ardent Studios with label founder John Fry as producer and released in 1972. While it did obtain widespread acclaim from critics, Stax's financial difficulties translated into an inability to get the album into stores, torpedoing the goal that the title playfully alluded to. The album itself proved to be a landmark in the establishment of Power Pop thanks to its catchy The Beatles-plus-The Who-influenced songwriting, and several of its songs have remained widely celebrated in the genre, such as "Feel", "The Ballad of El Goodo", "In the Street" (later covered by Cheap Trick as the theme song to That '70s Show) and "Thirteen". One song in particular, the chaotic, Stonesy rock of "Don't Lie to Me", would predict the group's sonic evolution.

With #1 Record bombing in stores thanks to Stax's horrendous distribution, tension and fights erupted between bandmates, to the point that Bell left the band towards the end of 1972. Chilton, Hummel and Stephens carried on as Big Star and recorded another album with Fry once again in the producer's chair, Radio City. In contrast to the polished production of #1, City had a rawer, more chaotic and underproduced edge to it, drawing more on The Who than The Beatles and with more Word Salad Lyrics. City bombed just as hard in stores due to a dispute between Stax and its distributor Columbia Records, but still produced at least one classic power pop song, "September Gurls" (later covered by many artists, including The Bangles).

Tired of the lack of success, Hummel left the band after City's release, choosing to finish his final year at college instead. Undaunted, Chilton and Stephens re-entered the studio with new Record Producer Jim Dickinson and several session musicians. Plenty of material resulted from the sessions, but record label interest was not forthcoming. Big Star finally broke up in late 1974, and their third album 3rd was finally released in 1978, and later re-released by Rykodisc as Third/Sister Lovers in 1992 with additional tracks. The 1992 edition has effectively supplanted the earlier version.

3rd served to only amplify the messy sprawl of City, with its material taking a much bleaker and more desperate tone, reflecting tensions within the band's inner circle, drug and alcohol abuse (particularly in regards to Chilton), and Chilton's dissatisfaction with years of being fucked around by incompetent record companies. Third's critically acclaimed material largely alternated between chaotic, rough power pop and bleak, haunted ballads, but it still managed to provide a few more songs judged as "classics", such as the depressing ballads "Big Black Car", "Kangaroo" and "Holocaust" and the oddball Christmas-themed power pop "Jesus Christ", which became a mainstay on college radio stations every December.

While Big Star failed to become what their name and debut album envisioned them to be, they were eagerly embraced by the emerging Alternative Rock scene at the beginning of The '80s - the first wave of popular alt-rock bands led by R.E.M. were nicknamed "jangle pop" and owed an obvious debt to Big Star. Later on, Dream Pop supergroup This Mortal Coil helped re-awaken interest in Big Star through their covers of "Kangaroo" and "Holocaust". Chilton went on to a erratic solo career, and Chris Bell put out a well-received single, "I Am the Cosmos"/"You and Your Sister" (both of which were later covered by This Mortal Coil on their album Blood (1991)), before dying in a car accident in December 1978. Bell's funeral was held the next day, which happened to be Chilton's birthday. A posthumous album of Bell's post-Big Star recordings, also titled I Am the Cosmos and including both sides of the single, was released via Rykodisc in 1992.

Chilton revived Big Star in 1993 alongside old mate Stephens and new blood Jon Auer and Ken Stringfellow of The Posies. A new album, In Space, followed in 2005 to a predictably mixed reception.

the day before Big Star was to perform at South by Southwest. Immediately, the music websites of the internet exploded with grief.

Andy Hummel also died in July the same year after a two-year struggle with cancer, leaving Jody the only remaining original member of the band.