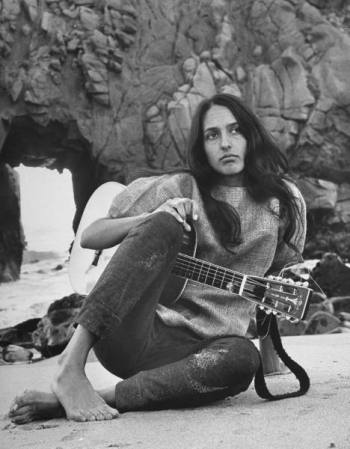 "I've never had a humble opinion. If you've got an opinion, why be humble about it?"
Advertisement:

Baez was one of the most notable protest singers of the 1960s, standing against The Vietnam War and supporting the Civil Rights Movement and environmentalism. Though her own songwriting skills have been praised, she's best known as an interpreter of others' works, most prominently those of Bob Dylan (with whom she had a close personal and musical relationship in the early '60s).

Baez's music is fairly varied stylistically, ranging from folk to country to pop. Her best-known composition is likely 1975's "Diamonds & Rust", a nostalgic reflection on her failed relationship with Dylan. It was notably covered by Judas Priest on their album Sin after Sin.

Tropes associated with Joan Baez include: