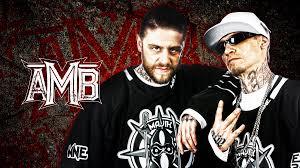 Otis aka Young Wicked (with beard) and Bonez Dubb (repping West Syde)
Axe Murder Boyz is a Hip-Hop duo from Denver, Colorado consisting of brothers Otis aka Young Wicked (James Garcia) and Bonez Dubb (Mike Garcia), who record music in the Horrorcore and Gangsta Rap styles. Their stage personas are based on the movie Frailty, which is about "the God's hand killers", a father and his sons who murder people they believe are demons masquerading as humans, claiming to have been ordered to do so by God himself. The lyrics of AMB songs like "God's Hand Killers" and "The Demon" reference the movie, and Otis' stage name comes from the name carved on the axe at the end of the movie. Not all their lyrics are derived from the movie, though, and many of their songs can be very accessible-sounding with catchy melodies and memorable hooks. As their careers progressed, they went from often extremely gory, grotesque lyrics to much more toned down content far less focused on serial killer fantasies, with their more recent work showcasing a shift away from the horrorcore of their earlier lyrics. Their music is generally defined by having strong influences from West Coast hip hop, featuring elements of funk and soul in their music, although their album Blood In Blood Out also featured some Rap Rock tracks.
Advertisement:

AMB started out releasing albums for local labels. The 2005 Underground Psychos contest held at the Gathering of the Juggalos won them a one-album contract with Psychopathic Records. Violent J had high hopes for the duo, considering them to be "the future of Psychopathic Records" (along with another new artist signed by the label at the time, Boondox).

AMB left after their sole Psychopathic release, continuing to release albums on their own label, Canonize. They had two releases on the Psychopathic subsidiary Hatchet House in 2008 and 2010 and one more in 2014 followed by a Young Wicked solo album the following year, but AMB had a massive falling out over Young Wicked's relationship with the daughter of Jumpsteady (the girl is Violent J's niece). AMB ended up signing with Majik Ninja Entertainment, Twiztid's record label, which, along with the entire MNE label declining to appear at the Juggalo March, led to a falling out between ICP and Twiztid.