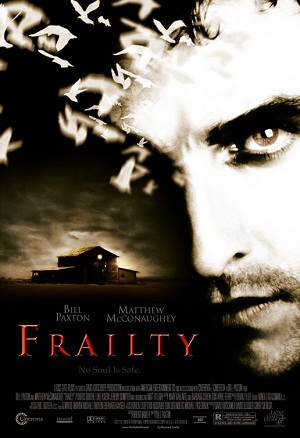 "You can't make things like that up, son. Killing people is wrong, destroying demons is good. Don't worry, God will send you your own list when you're older."
— Dad Meiks
Advertisement:

Frailty is a 2001 movie directed by Bill Paxton and starring Paxton, Matthew McConaughey, and Powers Boothe.

Fenton Meiks (McConaughey) comes to an FBI agent (Boothe) with information about the notorious God's Hand Killer, who has been terrorizing the state of Texas. Through flashbacks, we learn about Fenton, his brother Adam, and his father (Paxton) who has a religious experience that plunges the entire family into turmoil. The father gathers his sons together one morning and tells them they are now soldiers in a heavenly war, and are charged with destroying demons on earth. The revelation splits the family: Adam and his dad are on one side, believing they are destroying demons; meanwhile Fenton believes they are murdering innocent people and is torn between loving his father and thinking he's completely off his rocker. Fenton makes a fateful decision and has come to the agent's office to relieve his guilt and confess his family's buried secrets...