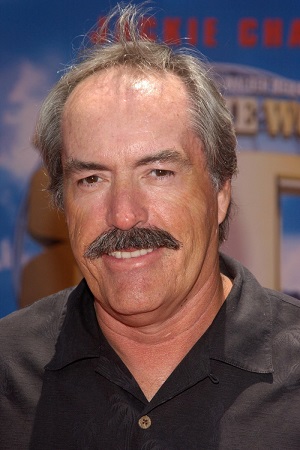 The man, the myth, the mustache.
"Powers Boothe... The first name especially leaves the reader wondering, "'What kind of powers? Mind control? Flight? Laser-beam eyes? It's laser-beam eyes, isn't it?'"
— Cracked on "The 9 Manliest Names in the World"

Powers Allen Boothe (June 1, 1948 – May 14, 2017) was an American television and film actor, instantly recognizable for his gravelly voice, piercing eyes and seriously badass name. He also wielded a moustache when he felt like it.

Boothe won an Emmy Award in 1980 for his chilling portrayal of cult leader Jim Jones in Guyana Tragedy: The Story of Jim Jones. As successful as he was in film, it's his television career that he is probably best known for, particularly such roles as ruthless, unstable brothel owner Cy Tolliver in Deadwood, ambitious Vice President Noah Daniels in 24, and controlling patriarch Lamar Wayatt in Nashville.

Sadly, his chances of showing us more badass roles came to an end when he passed away of pancreatic cancer on May 14, 2017 at the age of 68.

Tropes associated with his works or mentions in media: