The Family That Slays Together 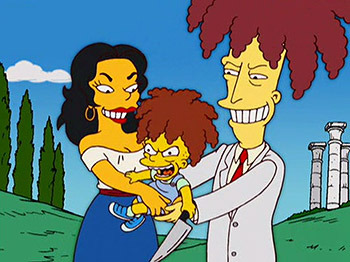 Aren't they sweet?
"She had a corpse under her bed
She had her fun but now he's dead
Her momma said, 'Come feed desire'
Her brother said, 'Hey, throw him on the fire!'"
— Rob Zombie, "House of 1000 Corpses"
Advertisement:

While it's not uncommon for some people skilled in a trade to pass it on to their children, sometimes the only thing a parent is skilled at that he can teach to his kids is murder, mayhem, and any other heartless criminal deeds you can think of. This will usually result in raising an evil clan, and when the kids are old enough, the family collectively and regularly adds to a rising body count and a growing criminal file.

Usually, The Family That Slays Together consists of at least one parent (if it is only one parent, it's usually the father), and at least two children of blood relation to the parent. If a mother and father are both present in the story, it's possible for the family to have only one child join them on crime sprees. Aunts, uncles, grandparents, or cousins may be among the ranks as well from time to time, especially when family inbreeding is suggested.

One common variation involves an Outlaw Couple kidnapping a child or a group of children for the duo to raise as they would their own kids (typically, this either results in Stockholm Syndrome, which is rare, to betraying or outright killing their own kidnappers, which would be more common).

Very often, this trope might overlap with Cannibal Clan, especially in the horror genre. Sometimes, they are also Professional Killers or Aristocrats.

Compare Villainous Mother-Son Duo, as well as Overlord Jr./Daddy's Little Villain, where a single descendant of a Big Bad seeks to follow in his footsteps, and Unholy Matrimony which involves two villains being in a loving relationship or marriage. Siblings in Crime can follow, naturally, if there's more than one child in the mix. Villainous Lineage is related if the kids pick up on their parents' evil habits without having been directly exposed to any of their criminal behaviors and/or it's a persistent trend throughout the generations.

Contrast Mama Didn't Raise No Criminal, which involves parents denying that their criminal offspring are really evil, Evil Parents Want Good Kids, where villains take steps to actively keep their children away from all that, and Criminal Found Family, in which the criminal family isn't related by blood at all.

Compare and contrast the Badass Family, who can sometimes be this as well when villains but are usually more heroic, and all forms of the Generic Ethnic Crime Gang, particularly The Mafia and The Irish Mob.