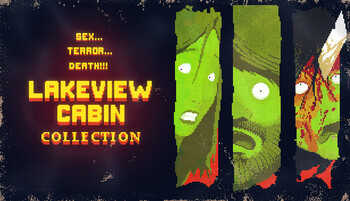 presents a loving tribute to the horror movies of the 70's and 80's, through the guise of a Horrorfest playing a collection of movies from the Lakeview Cabin series.

This time around, the player has four characters at their command, and may guide them through the coming terrors however they wish... Will you manage to keep everyone alive?

Four episodes Lakeview Cabin Collection are planned. The game was completed, with all four episodes and an Epilogue, on May 27th, 2016. A bonus mini-episode, "Last Christmas", was added in 2017, over a year after the game's final release.