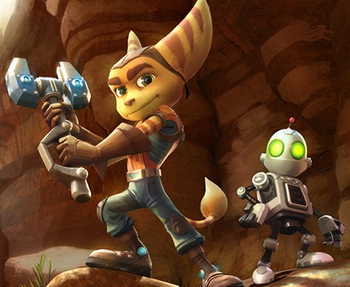 One of the most iconic and long-running PlayStation video game franchises. The series follows the adventures of Funny Animal alien Ratchet and his Robot Buddy Clank as they save the galaxy through Platforming, puzzle-solving, humor, and prodigious firepower.

The series was created and developed by Insomniac Games after they were finished with the first three Spyro the Dragon games and it is published by Sony Interactive Entertainment. This series maintains the whimsy and humor of the Spyro games, with a kitchen sink of sci-fi elements and a bunch of Impossibly Cool Weapons.

Tropes and examples not fit for this world:

TV Tropes, one of many weapons and gadgets not fit for this world.
Feedback