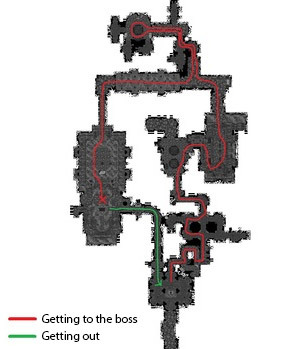 So, you've hacked and slashed your way through a dungeon and possibly passed a Point of No Return or two. You have reached the final room and taken the MacGuffin, and are now ready to leave this place.

The only question is... how? There's no way the game designers will make you backtrack through all the corridors you've cleansed all the way to the entrance, right? And sometimes it may even be impossible, as the original route has been blocked.

Luckily, there's a conveniently placed door, right there in the final room, just waiting for you to open it. You go through it, and voila, you're at the entrance, right where you started, saving you the trouble of returning here the long way. That's the Door to Before: an Anti-Frustration Feature that keeps you from having to waste time going back through a dungeon you've already cleared.

More often than not, you may even recognize the door as a Locked Door from before, which would be very convenient if you had a way to open it from the other side before you went the long route, saving you all the trouble. Of course, it's initially always impossible even with a BFG in your arsenal, but once you easily open the door from the other side, it will usually remain open, giving you quick access to the area that once used to be so hard to reach. If a bug allows you to open a Door to Before from the "wrong" side, it's a Dungeon Bypass and can lead to Sequence Breaking.

If they really want to tease you, the game designers may even replace a locked door with an Insurmountable Waist-Height Fence that's just too high to climb from one side, but once you reach its other side, there's something that allows you to climb and jump it and thus have a shortcut to a previously explored area.

Of course, search-and-rescue missions will never have such convenient shortcuts — instead, the player will have to bring the rescued prisoners all the way to the original entrance... and the corridors that you already fought your way through once will probably be repopulated with Respawning Enemies.

If you utilize your newfound MacGuffin to create a new exit, it counts as a Metroidvania.

These are a favorite of Speedrunners, as it's quite common for games to have glitches that make it possible to open the one-way doors from the wrong way, skipping minutes to hours of gameplay.

Not to be confused with Time Travel. Also, note that this trope pertains geographical or physical examples of shortcuts. If the instant return to a previous area is provided by an item or special feature, then it's an Escape Rope.