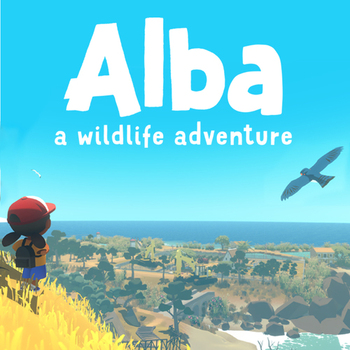 You should visit the Nature Reserve, if you haven't already. Before the Mayor bulldozes it to make space for his ego!''
— Grandmom
Advertisement:

Alba Singh, a young girl of about 11, is visiting her grandparents on the Mediterranean island of Pinar del Mar, only to find that the island's wildlife reserve was damaged in a recent fire. The mayor calls the town down there to announce the reserve will be replaced by a giant luxury hotel. Alba and her friend Ines decide to save the wildlife reserve by documenting all the local animals and helping the residents - human and animal - in order to get a petition with 50 signatures that the mayor will have to listen to. However, they only have the rest of the week before Alba goes home.

The game is described by its creators as a "chillectathon", with no hard time limits and allowing the player to progress at their own pace.

Tropes found in Alba include: