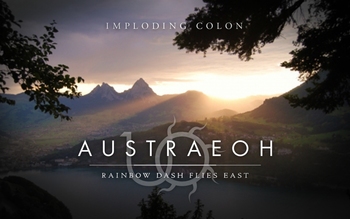 Austraeoh is a lengthy ongoing My Little Pony: Friendship Is Magic fanfiction series by Imploding Colon

. New chapters have been released daily since May 2012. There are currently eight completed stories: Austraeoh

, and an ongoing ninth, Ofolrodi

. Each story is 200 chapters long, with Utaan (clocking in at 300) and Ofolrodi (still unfinished, but topping 300) being the exceptions for the time being.

The official story summary is the laconic "Rainbow Dash flies east." Indeed, that's the only thing that happens for a while as the story begins: Rainbow Dash is flying in solitude across uninhabited scenic landscapes, and is about to reach the eastern edge of a map of lands known to the kingdom of Equestria. Where is she heading? Why has she left home? Why does she keep the Element of Loyalty on her? Any answers to these questions will not come early in the story.

The author, Imploding Colon, is an alias of shortskirtsandexplosions, author of well-known fanfics Background Pony and The End of Ponies, a fact that was not known initially and came as a surprise to many readers. The author has spoken almost nothing about Austraeoh and its sequels, only briefly acknowledging writing them in some recent blog posts. Although the author never replies to reader comments, he seems to enjoy reading them, as hidden references to last chapter's comments occasionally appear in the next chapter. Starting from about the mid-point of Austraeoh (the first story in the series), most characters and places have been named after frequent commenters on Fimfiction.Net.

This My Little Pony: Friendship Is Magic Fan Fic series contains examples of the following tropes: