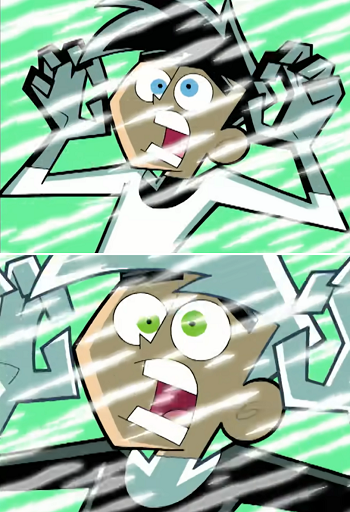 An Eye Colour Change is when a character's eyes change colour in response to some stimuli. The colour the eyes change into depends on the event and the character, but it can be anything from a shift in hue to something as dramatic as brown eyes turning bright yellow and round pupils lengthening into slits.
Advertisement:

This is generally a sign that something major has just happened. A possession, a shift in alignment, the acquisition of supernatural power (see also Magical Eye, if the power is directly tied to the eye), trauma, anything significant can trigger an Eye Colour Change. Being a robot (or a cyborg with Electronic Eyes) is also a common explanation.

Not to be confused with Inconsistent Coloring, which is where a character's eyes may change colour due to a mistake, retcon on the artist's part, or due to shifting lighting conditions.