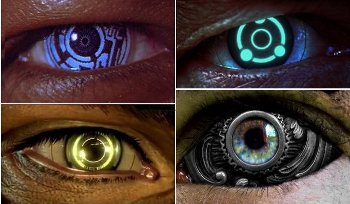 Eyes made from electronics. Prevalent in cyberpunk and post-cyberpunk works, occasionally crops up in Sci-Fi works that don't focus as much on transhumanism.

Normally the eye is some kind of upgrade or super sense. It may have a superzoom, infrared or perhaps digitised vision. This is quite common with the Cyborg hero whose powers are his cybernetic upgrades. In First Person Shooters and other games controlled in first-person perspective, cybernetic eyes may be the reason you see the usual Video Game Interface Elements.

It can also be a prosthetic replacement for lost eyes. These are commonly found in stories set in the far future with widely available technology. In reality, artificial sight technology is already pretty advanced,

so as writers catch up with science we should be seeing crude-but-workable Electronic Eyes in about 20 Minutes into the Future.

Sometimes the eye is very visually distinct. Bizarre irises or unusual pupils mark the individual. Working on the principle of the eyes being the window to the soul, these Technicolor Eyes can be a small but direct method of demonstrating the fact that an otherwise normal-looking individual is at least partially cybernetic. In the case of prosthetic eyes they also work as a scar signifier. Since the eyes are taken as so much more personal they can be a much smaller effect for greater emotional impact. And, of course, it can also show how evil a person is.

If only one eye is cybernetic, it is a form of Eyepatch of Power. If it can send images to its owner while detached, it functions as an Eye Spy.

See also the supertropes Cyborg and Eye Tropes. When the person with these eyes dies, expect to see Eye Lights Out. See Glass Eye for the fantasy version of this.