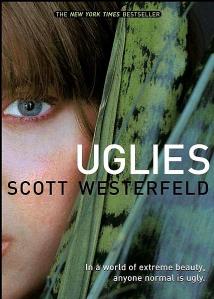 Uglies is the collective name given to a series of books by Scott Westerfeld:

The series is set in the future, three hundred years after a petroleum-destroying bacteria and genetically modified orchids went out of control, leaving the humans of the world to rethink their destructive ways.

Indeed, at first glance, this future seems to be a better place: clothes can be recycled on the spot, the environment is in better shape, and no one goes hungry. The people of the world live under a caste system: once they turn sixteen, teenagers are given operations to become 'Pretties,' beautiful, popular youths who can do what they want all day and night in New Pretty Town.

Nothing is wrong with the world—or so it seems.

A quick summary of the books can be found here.

There is also a spin-off series called Impostors.

The series was first optioned as a film franchise as early as 2006 but has been in Development Hell since then. In 2020, however, it was reported

that the first book in the series will be adapted as a Netflix film, with Joey King in the starring role.