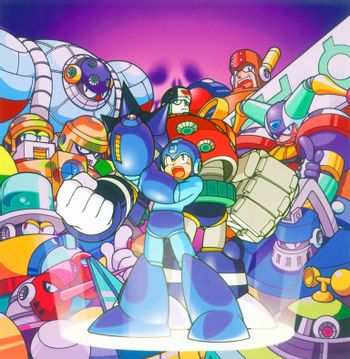 Mega Man 8 is a PlayStation and Sega Saturn video game, released in 1997. It was made to celebrate the 10th anniversary of the Mega Man series, as well as give the old school formula a new coat of 32-bit paint.

The plot begins when a duo of fighting alien robots crash-land into Dr. Wily's island base. Mega Man promptly arrives in time to save one of them, while Wily steals a strange source of energy from the wreckage of the other robot. After mowing down four of Wily's latest Robot Masters, Dr. Light finishes repairing the alien robot, named Duo, who soon after escapes, leading Mega Man in chase, only for him to nearly be killed by one of Wily's mecha, although Duo saves him in time. He reveals that Wily has been using "Evil Energy", a corrupting source of energy that he acquired from the robot Duo was fighting earlier, and that it must be destroyed lest it corrupt the earth in its entirety.

All in all, the game was a modest hit in both critical and commercial success, although it didn't get the same attention as the hit Mega Man X4. Regardless, it would be many, many years before a true Classic Mega Man continuation, Mega Man 9, would pop up.

It would later receive a SNES spin-off called Mega Man & Bass in 1998. Mega Man 8 would also be re-released as the part of two separate compilations: the Mega Man Anniversary Collection in 2004 and Mega Man Legacy Collection 2 in 2017.

A fan-made 8-bit remake of this game also exists, and can be found online.

Not to be confused with Mega Man 8-Bit Deathmatch or "Rockman 8."