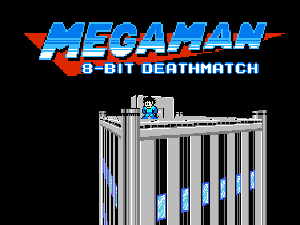 Does this look familiar to you?
Advertisement:

Mega Man 8-Bit Deathmatch is a Mega Man (Classic) themed multiplayer Game Mod for the Zandronum (previously Skulltag) engine, which itself is a Game Mod of Doom. It was first released in October 2010 from CutmanMike, who previously made Ghouls vs. Humans, and it fully focuses on typical multiplayer gameplay such as Deathmatch, Team Deathmatch, Capture the Flag and so on.

It takes place after Mega Man 6, when the real Mr. Xnote distinguished from Wily's portrayal of him in MM6 by the lack of sunglasses, flat eyebrows, and no dot on his forehead hosts the second annual Robot Master tournament. With Dr. Light's consent, all robots entering must be refitted with Mega Man's powers, to ensure fair competition. However, Dr. Wily sees this as a brilliant opportunity to prove his genius, and enters all of his robots in the tournament. Mega Man, not trusting Dr. Wily in the tournament, decides to enter, but since he can't watch over every match, Dr. Light enters his robots as well. The Player Character, a generic robot by the name of Maestronote though it can be given any name or skin you prefer, agrees to work with Dr. Light and investigate Dr. Wily's activities in the tournament.

In the initial release, the game's stages, skins and weapons are based off of the first six Mega Man games on the NES. Version 2 came in June 2011 and added content from Mega Man 7 while simultaneously borrowing the 8-bit graphics from the fan made project Rockman 7 FC. Version 3, released on December 21st, 2012, added additional content from Mega Man 8, also borrowing graphics from Rockman 8 FC, while retroactively adding content from Mega Man Powered Up to the original Mega Man chapter. Version 4, released on May 17th, 2014, chronicles the events of Mega Man & Bass and includes extra maps and skins based on Mega Man: The Wily Wars; but unlike the previous two updates, it doesn't borrow graphics from a retraux version (there are no "Famicomized" versions of either game), instead opting to use sprites done up from scratch. Version 5 arrived on July 29th, 2016, and it covers the plot of Mega Man 9. After a long wait, Version 6 was released on October 23, 2020 —- and it adapts content from both Mega Man 10 and Mega Man V (with the latter's graphics being fully colorized). A future (and presumably final) expansion will focus on Mega Man 11.

The game has its own Single Player campaign which pits the player against computer bots. There are currently thirteen chapters (the first six being the main story, and the other seven using the non-NES games as a basis), and each chapter features a series of predefined deathmatches before the player faces the chapter boss, though some chapters feature boss battles after certain deathmatch stages.

and does not require Doom.

Now has its own wiki HERE!