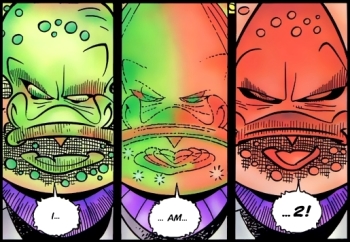 When a character uses a personal Hologram projector to disguise themselves. Often with no explanation of how they manage to keep it synced with their own body movements, especially if they are bigger or significantly smaller than the disguise.

Also covers instances of magic being used to project illusions, or uses of holograms as an Invisibility Cloak.

See also Lie to the Beholder.