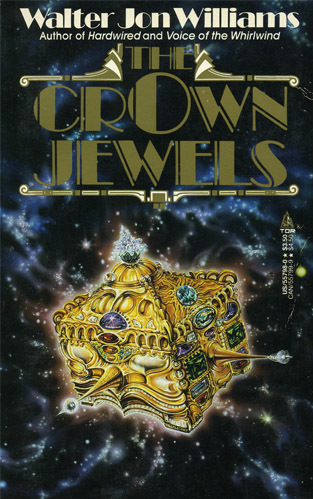 The image neglects to suggest the slightly-naughty wordplay in the title
If you can do it with adequate style, the law will even let you steal for a living.
Advertisement:

The Drake Maijstral series (sometimes known by the omnibus name Ten Points for Style) is a far-future space-opera comedy of manners by Walter Jon Williams.

Many centuries ago, Earth was conquered by the relatively benevolent Galactic Empire of the alien Khosali. Mankind thrived under the rule of the stern yet fair Khosali, spreading to many new planets, and rising to positions of power within the Khosali government. Recently, however, in an unexpected and unprecedented move, Humans won their freedom, and are now rediscovering their own past.

Drake Maijstral is an "allowed burglar". Many years ago, one of the Khosali Emperors turned out to be a kleptomaniac, and, since the Emperor can do no wrong, the Khosali legalized theft. Under very specific, limited circumstances. An allowed burglar must be noble, able to mingle with high-society, and, above all, must display impeccable style. Drake is one of the most stylish.

Unfortunately, human society, though still heavily influenced by Khosali culture, is starting to become a little unsure about the need for some elements of that culture. Like allowed burglars....

The three books in the series are: