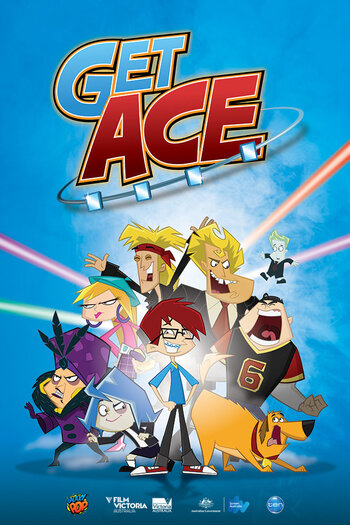 Everybody wants to get him! Everybody's out to get him!Characters Clockwise from center: Ace, Becky, Hilda, Tina, Mr. Walker, Ned, Hugo, Gordon and Lunchbox.
Advertisement:

Get Ace is an Australian series that aired in 2014.

The show centers around Ordinary High-School Student Ace McDougal, whose life takes a turn for the exciting when he receives high-tech spy braces by mistake. Coming with a holographic butler named Hugo and tons of high-tech gadgets, there's a function for every occasion! From high-powered rocket thrusters to stringy dental floss, Ace will need all of them to escape the clutches of the Master of Disguise Ned, the intended recipient of the braces, and his conniving mother Hilda.

Meanwhile, Ace still has to juggle getting to class on time, avoiding the wrath of Gordon Rainer and impressing his crush Tina. Even at home, Ace isn't safe from his sister Becky, who's convinced that he's an alien from outer space and is determined to prove it to the entire world!

The whole series is available for free on YouTube

(HD)note The Tubi release omits the tags after each episode.

Get Ace contains examples of:

Ace's freaky high-tech braces make it impossible for him to go to a dentist but also quite difficult for him to remove his tooth at home.

Ace's freaky high-tech braces make it impossible for him to go to a dentist but also quite difficult for him to remove his tooth at home.