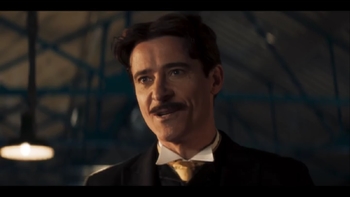 This is the face of a man who will invent a new way to play the Doctor Who theme. No, seriously.

The one with the Timeless Doctor. And we don't mean Jodie Whittaker.

And the one with the Master's girlfriend, Rani (not that one).

Niagara Falls, New York, 1903. Nikola Tesla is attempting to get funding for his generator plant so he can work on his project for transmitting energy through the "aether", but is falling flat due to investor disbelief and the reputation following him around because he claims to have picked up a signal from Mars. On top of that, something's wrong at the generator, and when Tesla investigates he discovers that someone has been stealing parts from the machinery. But when he thinks his assistant Dorothy Skerrit has come along that night, he instead discovers a mysterious floating green sphere, which he pockets after Dorothy does turn up, both amazed. But then an attack comes, from someone armed with weaponry not of this Earth. Help comes in the form of the Doctor, unexpectedly, who offers Tesla and Dorothy a way out: a train back to New York, with Graham, Ryan and Yaz on board. The fam has been seeing the sights, but the Doctor picked up an odd signal from Niagara Falls. The Doctor is amazed when Tesla introduces himself, although her companions aren't as familiar with the Serbian-born inventor. She also deduces that he is lying about something. Just then, another attack comes from a cloaked figure firing a laser weapon, and a chase begins up the length of the car. When the Doctor and Tesla are confronted by the attacker, the Doctor drops part of the roof on the figure and acquires the assailant's weapon, a stolen Silurian blaster.

Once everyone is safe, the Doctor having detached the rear of the train to lose the cloaked figure, the Doctor confronts Tesla about his lie, noting that she'd asked him if he'd seen anything weird, yet she's detecting the same energy signature she was investigating now coming from him. Tesla and Dorothy refuse to disclose it, so the Doctor and her fam decide they'll just have to stick around. In New York City, people are protesting alternating current outside Tesla's lab, believing it's more dangerous than the direct current advocated by Tesla's rival Thomas Edison. Once inside and away from the crowd, Tesla claims he's unaffected by people's protests against him before leaving the room and implicitly getting angry elsewhere. Tesla's lab turns out to have less stuff in it than expected, and the companions discuss where they've heard his name before. Eventually, the inventor returns and shows the fam the glowing sphere he picked up. The Doctor recognizes it as a "Thassa Orb", an alien data storage device sent out by one of the ancient races, but quickly deduces that it's been altered from its original purpose somehow, and not in an especially skilled fashion.

They are interrupted by a spy of Edison taking a photograph of them before running off. Concluding that Edison has something to do with the attack on Tesla, the Doctor takes Ryan and Graham to meet Edison, who is busy stirring up the fears of the public with his claims that Tesla's alternating current is much more dangerous than his direct current. Edison shows interest in the Silurian blaster, but eventually explains how Tesla used to work for him, but left when Edison didn't pay him for his work fixing a generator. Edison also wants to know what happened to his spy, who he hasn't seen today. Yaz stays with Tesla, who explains his dream of using Wardenclyffe to project sound and images through the air; a precursor to wi-fi. While they are talking, the Thassa Orb starts to send out waves of energy, apparently scanning for something.

Back at Edison's factory, another cloaked figure uses bolts of electricity to kill the assembled workers. As the Doctor, her fam, and Edison run, they discover the attacker is using the form of Edison's spy, and once trapping it with fire, see the shadow of its true form, with a scorpion-like tail. The Doctor tries to warn Yaz, but two more attackers have taken Dorothy hostage. Tesla and Yaz offer the Thassa Orb, but the attackers reveal they want Tesla. They teleport him away, and Yaz grabs ahold and is brought along, to their ship, cloaked above New York. They meet the queen of the aliens (called the Skithra), who reveals they want Tesla to repair their technology for them, including weapons.

The Doctor brings Edison and the Fam in the TARDIS to pick up Dorothy and takes a closer look at the Orb, discovering that it has been modified as a tracking device to find Tesla. Dorothy realizes that it must be connected to Tesla's signals from Mars, and directs the Doctor to go to Tesla's lab at Wardenclyffe, cautioning everyone to keep a close eye on Edison when he sees this is where all of Tesla's current projects have been moved. Finding Tesla's readings, the Doctor rigs a teleporter to send her to the Skithra ship, showing disgust that the Skithra merely steal other people's technology instead of building anything for themselves. She teleports herself, Yaz, and Tesla back to Earth, only to receive an ultimatum from the Skithra Queen: give them Tesla, or they will attack the Earth. Tesla considers surrendering, but the Doctor has a plan, and she needs Wardenclyffe tower to make it work.

The Doctor and Tesla plan to use the tower to channel a lightning bolt to blast the Skithra ship, disabling the Queen, and thus the hive-mind of the whole Skithra group, in one stroke. While the Doctor and Tesla work on the tower, Graham and Ryan rummage through the lab for possible weapons, and Yaz and Edison try to warn the people of New York to stay off the streets as the Skithra land; they have little success until Edison starts declaring Tesla's tower is going to kill them all. As the Skithra move in on Wardenclyffe with only a TARDIS-powered force field to hold them at bay, the Doctor explains that the force field has to be brought down to allow the TARDIS to power the lightning strike. But once the field comes down, the Skithra don't advance. The Skithra Queen has decided to come for Tesla herself. The Queen mocks the Doctor for her plans failing, grabbing a piece of technology that the Doctor tried to get. Only, the piece of tech is the teleporter the Doctor used earlier, and the Doctor activates it to force the Queen back onto her ship. One lightning blast from Wardenclyffe tower later, and the Skithra are forced to retreat.

Following their experience, Edison offers Tesla a job with him again, but Tesla declines. The Doctor explains to Yaz that while Tesla will still fall into obscurity, his ideas and inventions will live on to inspire future technology. As Tesla says, "The future is mine."