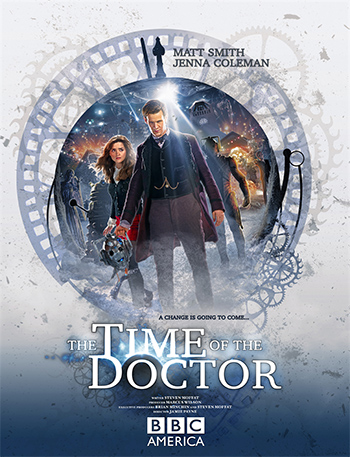 It's time to say goodbye to Matt Smith.
"And now it's time for one last bow. Like all your other selves. Eleven's hour is over now. The clock is striking Twelve's."
— Clara Oswald
Advertisement:

The one where the Doctor gets naked.

Orbiting a quiet backwater planet, the massed forces of the universe’s deadliest species gather, drawn to a mysterious message that echoes out to the stars. And amongst them — the Doctor. Rescuing Clara from a family Christmas dinner, the Time Lord and his friend must learn what this enigmatic signal means for his own fate and that of the universe.

This Christmas... Silence Will Fall.

"I will not forget one line of this. Not one day. I swear. I will always remember when the Doctor was me."