Web Animation / Scream of the Shalka 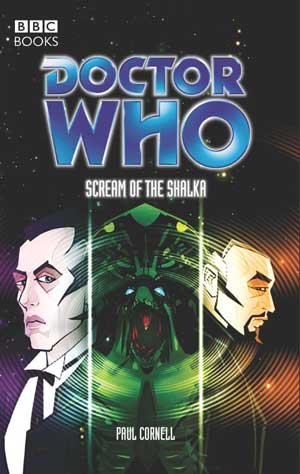 The novel of the cartoon of the series.
Joe: Do you know what it's like to be a doctor and stand by and watch these things and not be able to do anything?
The Doctor: (sigh) So many answers to that.
Advertisement:

The one with the would-be Nine and the alpha version of Professor Yana.

Scream of the Shalka is a flash-animated Doctor Who serial with Richard E. Grant as the voice of a Ninth Doctor, Sophie Okonedo as his new companion, and Derek Jacobi as the Master. The story was written by Paul Cornell, and its animation was produced by Cosgrove Hall. The serial was webcast by the BBC's official Doctor Who website in November and December of 2003, following the success of the motion comics they previously aired in a more ambitious direction, and was advertised as being an official continuation of the television series.note This may have been down to the production team taking advantage of the lack of interest in the franchise from the BBC, meaning they could declare it as such without any pushback; purportedly BBC management only realised what the website team had done when the new TV series was announced

An English village is attacked by lava creatures called Shalka. The Doctor arrives to fight off the Shalka, but they have implanted pods in people's heads in the village and around the world, leading humanity in a global scream that will terraform the Earth into a Shalka habitat.

The webcast was revolutionary for a number of reasons. It was going to be the first broadcast piece written by an author of the Doctor Who Expanded Universe novels. It starred a black companion (something previously only seen in spin-offs). And it had the Doctor and the Master travelling together, exploring the possibility of friendship between them.

Sadly, the timing was unfortunate — because just before its release, the new TV series was announced for 2005. A second serial was commissioned but cancelled with the announcement the show would be returning to television, meaning Scream of the Shalka and its Ninth Doctor were demoted from full canonicity to being part of an "alternate universe", not considered part of the Whoniverse canon (inasmuch as there is one).

This story did, however, get both a novelisation (released as part of the Past Doctor Adventures range) and an official prose sequel, "The Feast of the Stone"

, and the serial was released on DVD with the same level of attention and care as the classic television stories, including an audio commentary and a full set of extras. The story has one other interesting legacy: the money for the second story had already been allocated, but after it was cancelled this was instead used to fund animated reconstructions of the two missing episodes of the Patrick Troughton story "The Invasion".