Recap / Doctor Who: The Curse of Fatal Death 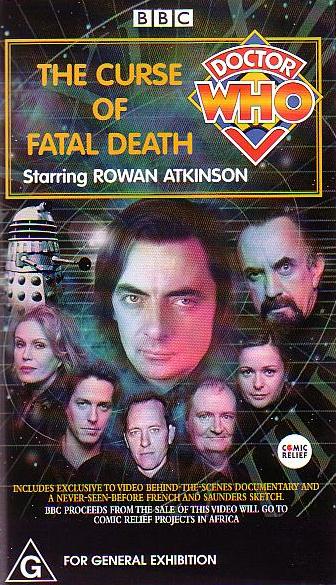 He's difficult to get rid of — when he's not the direct cause of his own ridding. Repeatedly. Or hers.
Advertisement:

The one with Mr. Bean.

"The Curse of Fatal Death" is a 1999 Doctor Who Affectionate Parody, produced by The BBC for Red Nose Day between the 1996 TV movie and 2005 revival. It was written by Steven Moffat, who took over the revived series of Doctor Who in 2010.

The Ninth Doctor (Rowan Atkinson) contacts the Master (Jonathan Pryce), wanting to meet him on the planet Terserus. The Doctor reveals that he's planning to retire and is engaged to his companion Emma (Julia Sawalha), after which things get... kinda weird. And then the Daleks get involved, aligned with the Master but with their own goals as well. When the Doctor and Emma are captured, he's killed several times and rapidly cycles through being Richard E. Grant, Jim Broadbent, Hugh Grant, and finally Joanna Lumley... who decides she'd actually rather shag the Master than fight him.

The comedy special is notable for offering an early glimpse into concepts that Steven Moffat would later bring into Doctor Who proper, once he became the series' showrunner. These include the Doctor marrying a companion, Time Lords regenerating as a different gender, the Master getting stuck in sewers with Daleks, Emma's outfit (a version of which was seen on companion Amy Pond later on), extremely complicated time travel schemes, and the good ship Doctor×Master.

Originally broadcast in four short parts, the BBC released a two-part version on VHS which, aside from the Comic Relief mentions, resembles any other Doctor Who release from around that point.

A tie-in work, "Who's After Your Cash" was printed in The Mirror Official Comic Relief Newspaper issued by The Mirror on Comic Relief Day. Written by Rowan Atkinson, it was a letter by the Ninth Doctor urging readers to watch "The Curse of Fatal Death". Can be viewed for free here

. The night itself also complemented special with promotional links, topped off with a short message to the audience from Atkinson's Ninth Doctor; these extras have been unofficially uploaded online.

"The Curse of Fatal Death" provides these examples, which we'll explain later:

When the Master's plan against the Doctor backfires, he's forced to take a 312 year slow path before he can enact his revenge.

Example of:
The Slow Path

When the Master's plan against the Doctor backfires, he's forced to take a 312 year slow path before he can enact his revenge.