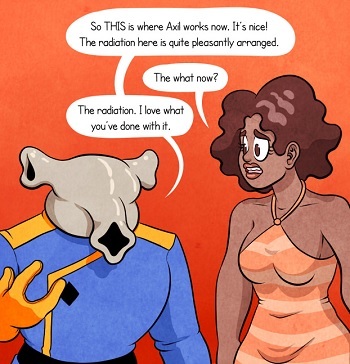 "I have eight other senses, but I'd trade them all, even smision, to be able to taste."
— Bender, Futurama
Advertisement:

One way to make an alien creature seem bizarre to human audiences is to have it detect the world around it with a different array of biological senses than us. Often they're depicted as using sensory mechanisms found in other Earth species, such as echolocation, thermographic vision, or sensitivity to electrical impulses or vibrations. More rarely, writers will equip aliens with biological versions of radar or other technological sensors, or they'll invent senses that discern esoteric forces such as psychic energy.

Senses that are found in we humans are often absent or much-reduced in beings equipped with bizarre alien senses. On film, this trope may be depicted with Point of View shots using image-distorting or false-color effects. Most commonly seen in Science Fiction, but occasionally in Xenofiction or other Speculative Fiction genres.

A subtrope of Bizarre Alien Biology, and supertrope to Mysterious Animal Senses. Frequently correlated with Eyeless Face. Contrast Blindfolded Vision, in which someone denied their normal eyesight relies on other sensory modes, or Super Senses, when normal human senses are enhanced. Commonly found in The Morlocks as well as aliens. May permit the perception of a Fictional Color. For a different sort of alien feeling, see Inhuman Emotion.

When the bizarreness applies to the way the alien communicates, it's Starfish Language.