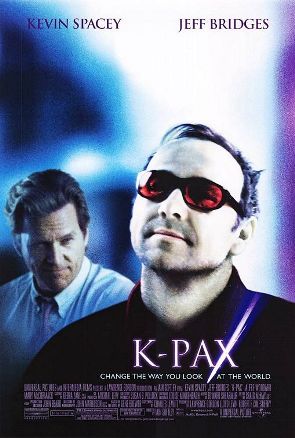 Dr. Powell: I'd like to begin by asking you... if you know why you're here.
prot: Of course. You think I'm crazy.
Dr. Powell: I prefer the term "ill". Do you think you are? Ill?
prot: (shrugs) A little homesick, perhaps.
Advertisement:

A 2001 adaptation of the 1990 novel of the same name, K-PAX is the story of a clinical psychiatrist (Jeff Bridges) who takes on a patient claiming to be an extraterrestrial from an advanced alien civilization. The patient (Kevin Spacey), named prot (rhymes with "goat" and spelled with all lowercase letters) displays vast academic knowledge and remarkable philosophical outlooks, which begin having positive effects on the patients and staff of the Manhattan Psychiatric Institute... while leading to increasing uncertainty over his true origins.

K-PAX is host to scores of theories as to the exact nature of prot's character, and remains one of the definitive Maybe Magic, Maybe Mundane films to this day.