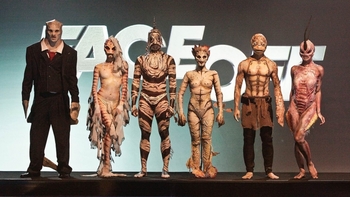 The kind of makeup that you can't make up.
Advertisement:

Face Off is a Talent Show broadcast by Syfy where makeup artists compete by designing and applying makeup and prostheses. It is hosted by McKenzie Westmore, and the judges and guest judges are accomplished leaders in the industry such as Glenn Hetrick, Ve Neill, Patrick Tatopoulos, and Neville Page. Guest judges include Brian Grazer, Kevin Smith, Paul W.S. Anderson, Greg Nicotero, Rick Baker, Doug Jones, Len Wiseman, Gale Anne Hurd and Marcus Nispel. Every week the artists complete challenges and the judges eliminate a contestant until only three are left, who then compete one last time for the grand prize. The prizes change from season to season, but they usually involve a cash prize, a car and a supply of makeup.

Every week they face a spotlight challenge, after which a contestant is eliminated. Sometimes there is a foundation challenge at the beginning of the episode whose winner gains something to help in the spotlight challenge. The challenges are usually the sort of thing you would find in a science fiction or horror movie, but they will occasionally be given something more mundane, like aging someone or designing a tattoo.

The first season premiered in January 2011, and the second season ran at the same time in 2012. Since 2013, two seasons have aired per year, typically one premiering in January and the other in July or August. Season 13 was announced to be the show's final season.

Face Off provides examples of: